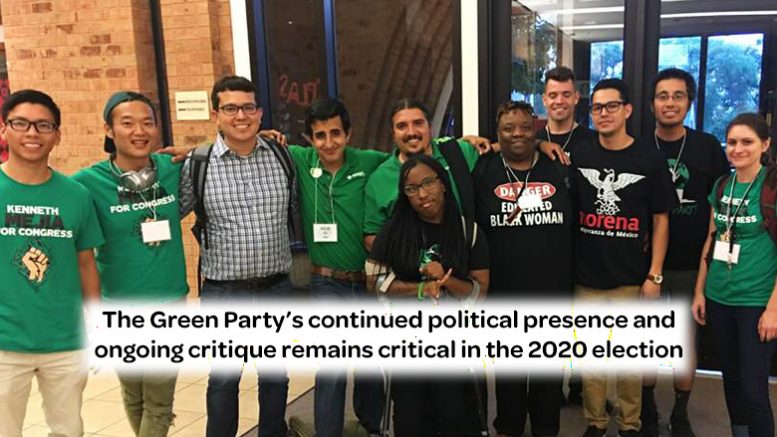 Socialists and the 2020 Election

Solidarity By Linda Thompson and Steve Bloom January/February 2020 issue PROSPECTS FOR SOCIALISM are off in the future. The 2020 presidential election is here and now, and confronts us with a right-wing menace unlike any that has been faced before. When asked what our goals are in the 2020 elections the majority of left activists in the USA will say: “to defeat Donald Trump.” Many are even more specific: “We are Bernie or Bust.” If we are honest with ourselves, however, we must acknowledge that many of these will also end up urging people to vote for the eventual Democratic…

Black Agenda Report A Discussion with Nick Brana February 13, 2019 It is vitally important to create a mass-based and corporate-free party of working people. “The Democratic Party is so conservative that Pelosi is now left of center.” Intro Note: The following discussion with Nick Brana, executive director of the Movement for a People’s Party and organizer for the Labor-Community Campaign for an Independent Party (LCCIP), is reprinted from the February 2019 issue of Unity & Independence, the monthly labor supplement of The Organizer newspaper.  Nick Brana was an organizer for Draft Bernie for a People’s Party. Brana is now…

The Guardian By Cornel West November 17, 2016 The neoliberal era in the United States ended with a neofascist bang. The political triumph of Donald Trump shattered the establishments in the Democratic and Republican parties – both wedded to the rule of Big Money and to the reign of meretricious politicians. The Bush and Clinton dynasties were destroyed by the media-saturated lure of the pseudo-populist billionaire with narcissist sensibilities and ugly, fascist proclivities. The monumental election of Trump was a desperate and xenophobic cry of human hearts for a way out from under the devastation of a disintegrating neoliberal order…

The Hill By Scott McLarty, contributor October 24, 2016 We were treated to a double “October surprise” on Friday, Oct. 7. The video of Donald Trump crowing that his celebrity status entitles him to assault women slightly eclipsed Hillary Clinton‘s leaked speeches. But we still learned that Clinton holds “public and private positions,” that her populist promises regarding free trade, preserving Social Security, and checking the power of Wall Street probably won’t survive Inauguration Day. Millions of voters have figured out that the two major parties don’t represent them. They’re right. It’s not a two-party system, it’s a two-party racket….

Green Party of Ohio By Bob Fitrakis & Suzanne Patzer September 29, 2016 Voters beware! Don’t let mainstream shills for the Democratic Party masquerading as non-partisan progressive journalists or pundits bully you into believing you can’t decide for yourself or that the fallout from your vote will topple our nation. First of all, let’s get something straight. No vote is a “wasted” vote. Anyone who tells you this does not have respect for you or our democratic system. All Votes Matter. A person who takes time to think about issues or candidates and goes to a polling site to cast…